To Say That He or She “Can’t Even Boil an Egg!” Is A Bit Unfair, since Boiling An Egg Correctly Can Be Quite A Difficult Thing To Do!

Saying somebody cannot cook because they “can’t even boil an egg” is not my definition of a culinary failure or a lousy cook. Try doing the same thing my brother did and I would have no problem saying you haven’t a clue when it comes to food preparation!

Not exactly what I wanted (a matter of seconds can ruin your egg and turn your runny yolk hard – I still had to eat it!)

There were many disadvantages growing up female in our house in Ireland in the early 70’s and thank God, that has mostly changed, (yes, only mostly). The girls in our house had to do things for our brothers that they were never expected to do for us. We made them tea for breakfast, and whenever tea was requested, we girls had to make it. Tea always came with a sandwich, or toast (or a biscuit) and we had to make that too. That was just tea, we also dressed their bed, polished their shoes and did anything else for them that remotely whiffed of domesticity. I  thought this was the norm, but when I got a little older and wiser and questioned “why?” I was made feel like an upstart.

Anyway, that is in the past, and looking back on my childhood experience (in this regard at least) there were many advantages to being a female. For one I became very self-sufficient, learning to do all things we humans have to do on a daily basis until the day we die: cook, clean, grocery shop, organise a living space. Yes, all those years of domestic training have paid off and I must say that mastering the art of boiling an egg took a lot more practice and patience than you would think. And, the funny part is that it was my father, not my mother who taught me this skilful art. Boiling an egg where the yolk remains soft, is all in the timing, and my father had it down pat. Every time he made me an egg it turned out perfectly and when I tried using a timed method (he just guessed correctly every single time!) would get it wrong more often than right, and end up having to eat an egg that was jelly-like, or as hard as a bullet. The way I learned was by timing him every time he made one for breakfast and eventually I got it down.

What did my brother do to prove his ineptitude in the kitchen all those years ago? He boiled a pot of potatoes, something he ate every day from the cradle to adulthood, without adding a single drop of water to the pot! Even the smell of burnt potatoes wafting through the house did not give him cause to wonder if perhaps he had done something wrong. My sides ached with laughter when I found out what he did and I’m laughing right now just thinking about it. To his credit he has since become quite competent in the kitchen, but he still calls me for advice on things that I learned how to do in-between making tea and polishing shoes!

*This is a Blood Type A Diet Recipe (eggs are neutral). Eat alone or with a sprouted bread with a little extra-virgin oil & sea-salt (no butter or black pepper)*

2 – The moment the water begins to boil, put timer on for 2 minutes 50 seconds. While egg is boiling, toasted bread and slather with butter. 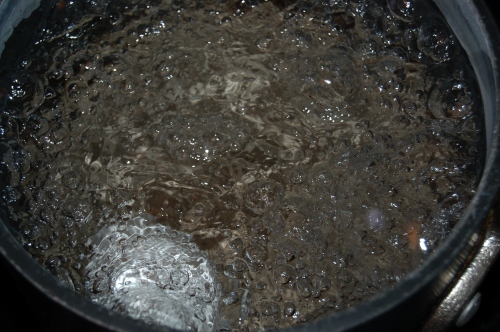 Bring water to a boil

3 – Remove egg from water with a large spoon and place in egg cup fat side down. Tap a knife or a small spoon (I use the spoon I will egg my egg with) evenly just under the top of the egg, working your way all around in a circle. Do this immediately as the egg will continue to cook.

The perfect egg for me: runny in the middle and beginning to slightly harden around the edge of the yolk

4 – Place tip of your spoon all the way through the crack to the other side and lift up on the spoon and the top with come off. 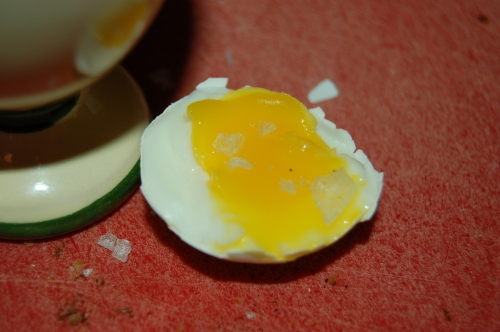 The piece de resistance. I eat the top first as it gets hard fast!

Eat directly from the shell, seasoning with salt and pepper as you go and enjoy with lovely warm buttery toast

I am in Manhattan for my friend Bird’s birthday. We went out to dinner last night (which I will post tomorrow!) and stayed up late, resulting in a lazy morning of lolling in bed until 9am: shameful! Of course there is no crime in getting up late, and I realize that late is a relative term. so, relative to going to be at 2am, I now am beginning to think that I got up way too early! 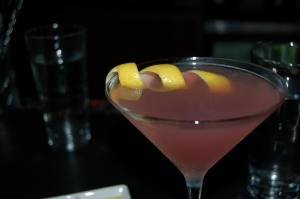 one of last’s night’s birthday indulgences

I have escaped to the city for a couple of days on my own, and it doesn’t take long to be all consumed by what I, and I alone, want to do. When I am in Manhattan, a city I lived in for 8 years, I feel like I am in a place that knows me, so am automatically embraced and become part of the beautiful landscape of streets, buildings and people.

My friend Bird loves her little neighborhood, and knows where to find things like, the best sandwich, or where to get a good inexpensive bottle of wine, even where to go if your shoes need mending. As we left her apartment she knew exactly where we should have breakfast, bearing in mind that I needed a very good cup of strong coffee.

After a six-minute chilly walk she opened the big glass door of Le Pain Quotidien, a bakery and restaurant on 7th avenue, and I was immediately hit with the smell of warm bread and pastries. She said it is one of a chain, which is always a turnoff (it makes me think of assembly line food), but assured me that the quality of the food was as good as any boutique still counterpart. I believed her as she hadn’t been wrong yet when it comes to what good food should taste like.

The glass display case right in front was filled top to bottom with mouth-watering croissants, fruit turnovers, muffins, brioche, Danish pastries, lines of coconut macaroons, mixed berry tarts, lemon tarts, pistachio tarts, crumbles, and the biggest chocolate chip cookies I had ever laid eyes on – one big YUM moment! It was going to be tough when it came time to placing my breakfast order.

The place was large and airy with big wooden communal style tables, interspersed with wooden shelves lined with their own brand of jams, honey, syrups and sweet spreads.

some of the restaurant’s honey and syrups

Diners were jammed at tables in a very comfortable way and we ended up at a little table close to the window with a great view of the restaurant in all its bustling charm. It seemed to be filled with quite the international crown of tourists and locals alike, all enjoying coffee, pastries and of all things: softly boiled eggs.

This was the first time I had ever been in a restaurant in the United States where the lowly boiled egg breakfast was elevated to the status of  such sophisticated snobbishness. A soft-boiled egg sitting in an egg cup and eaten from the shell with a spoon and a dash of salt and pepper was served on every breakfast table in Ireland on a daily basis when I was growing up. It was the quintessential starter of every school girl or boy, farmer and ordinary Joe or Mary. It was by no means held in anything close to the ranking it stood at in this fairly fancy bakery on the Upper West Side of Manhattan where one egg was the price of 2 dozen. 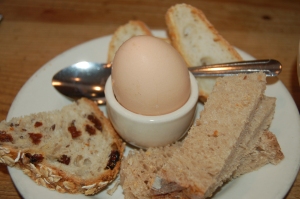 A boiled egg fit for a queen

Nonetheless, it was presented beautifully on a plate in a white egg cup, surrounded by at least four different types of bread, some of which having been delicately sliced into fingers (presumably for dipping into the runny yellow yolk). The thing that was impressive to me was that each egg appeared to have the perfect ratio of runny yolk to solid white.

The coffee was really good (and ceremoniously served in big bowls. I felt like I was in Paris)

It is difficult to get the timing right and I became an expert at boiling eggs to soft perfection by my father. He never failed to get it perfect every time and he did so by “feel’. This was his very favorite breakfast and when he sat down to eat it, he placed his egg cup directly onto the table and poured salt in a tiny mound beside it. With each scoop of egg he dipped the end of his spoon into the salt before placing each custom-seasoned bite into his mouth. It was like watching a little piece of theatre from the time the egg went into the cold water, to the last scraping of white clinging to the shell. 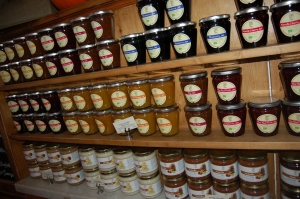 My friend Bird opted for a soft-boiled egg (I just couldn’t bring myself to ordering something so familiar to me in a restaurant filled with complex pastries and sweets), and when she began to tackle it, I realized she needed a lesson on the proper protocol of eating an egg from it’s shell correctly. Luckily she prides herself enough in being versed in all things cultural that she was only slightly insulted by my criticism (muffled laughter). I told her to use the side of her spoon to gently tap a circle close to the top of the egg and then remove the top by inserting the spoon through the cracked circle to remove the top, instead of using her butter knife to hack away at it like some cave woman. There were many more instructions, but suffice is to say she is now an expert in the art.

I decided on something I would, and could never make to my satisfaction: a pear and apple turnover, which I split and slathered with one of their jams. That, along with my bright red bowlful of wonderful coffee put a smile on my face, and armed me with strength to get through what was bound to be a fun day in the city.

This pot of jam came home with me

If you ever get to this city I recommend giving Le Pain Quotidien a try. The food is fresh and organic, and everyone (at least on 7th ave.) on the staff cheery and helpful.